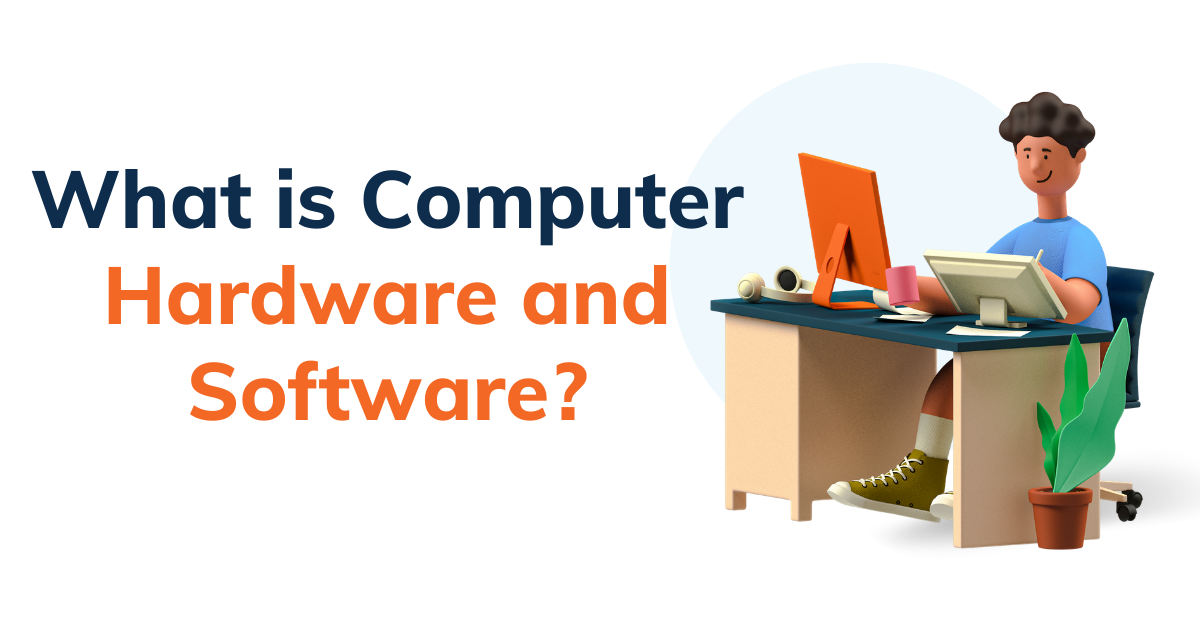 The computer monitor which we use to view the display is a Hardware Device.

A printer which we use to Produce outputs,a computer memory which is used to store data or programs all are the types of hardware used in computer system for better functionality of computers.

IT professionals develop customized programs that can be used in certain areas of our day-to-day life.

These types of software or programs are very helpful and can reduce human efforts immensely.

Different PC Software can be categorized in two main types

Computer software needs hardware to function properly. For Example  Hard disk drive is a hardware device of a computer system which saves or stores information, programs or data in high volumes but it cannot work in absence of software programs.

The software helps hardware to run and vice versa.

Another example if you have installed a sound card on your computer system which is used for playing sound, videos, and also used for playing games, but you cannot hear any sound without proper driver installation that is software that activates the hardware to function properly.

Drivers are software program which comes with the hardware.

So we can say that to use full features of hardware and software they are dependent on each other both plays vital role in each other functions.

Hardware is an essential part of the computer system like CPU, Ram, Power supply, Monitors.

We cannot start or use our computer if any part of the devices is missing but speakers, printers, or even mouse are some of the hardware when found missing does not affect the boot process of the computer, these devices are used for additional functions of the computer.

Types of Hardware Component Used in Computer & Their Differences

As we have discussed above that hardware are physical devices which can be touched.

These are the most used and common hardware devices here mentioned above some of the devices are used for better functionality or used for additional features. Like Speaker and Printers.

They are not used in the boot process of PC as when found missing PC cannot start or boot on its own. They are not responsible for booting computers.

Cabinet case comes in various shapes and sizes but commonly used case is a tower case whose height ranges from 15 to 25 inches.

They enable different types of hardware devices to be fit in themselves to make it a whole and all the devices are connected to the case using screws.

The Computer Motherboard or mainboard is nothing but a piece of PCB (printed circuit board) where all the other devices are connected to it using cables & wires.

Motherboard generally distributes all the voltages and power received from SMPS or power supply to other parts of the hardware devices attached to the PC.

RAM [Random Access Memory] is an essential part of the computer system which is used for storing data or program temporarily.

It is a volatile memory that tends to lose data when power is missing from a power supply.

When RAM is found missing motherboard gives a sound, and no display is found on monitors.

It is a type of non-volatile memory that does not lose data or programs when there is no power.

Nowadays huge volume of data can be stored in a hard disk.

Which are also called as secondary storage hardware devices.

CPU stands for Central Processing Unit which is responsible for almost all the operation computer system performs.

Every input which is sent by input devices is first collected in primary memory and later transferred to the CPU for further processing.

SMPS is known as Switching Mode Power Supply. Which is responsible to give power to the motherboard later this power is distributed among the other hardware devices for better functionality.

The keyboard is an input device that is primarily used for entering text as input to the CPU.

The mouse is a Pointing device that is used for selecting, pointing, and drag icons, files, and folders from one location to another in hard drives.

Monitors are display units or commonly called as VDU which stands for [visual display unit] they are used to display information received from computers on their screen.

They are also called as SOFTCOPY Terminals.

Printers are hardware component of the computer which is often used for producing outputs on papers as a HARDCOPY.

Speakers are used to output digital signals. You can use a speaker for hearing sound, videos and playing games.

Different Types of Computer Software and Their Uses

You cannot touch or feel the software as they are just a set of instructions which is written by SW programmers for an application.

The user will need both hardware and software for a computer system to work properly. Hardware reads software.

Most of the software on our computer system is in the form of programs.

The system software is any software which controls the hardware so that any application software can run and can be executed to perform various task mentioned by programmers.

System software runs and executes programs, they also monitor various other components of a computer system like CPU, primary and secondary storage, and other peripheral devices of PC.

They communicate and control peripherals devices like printers,scanners,webcam,sound cards etc

They control the hardware of computer systems so that they can work efficiently and Properly to perform the specific task given to them and also to provide a platform for application to perform and to execute in the overall development of application software.

They perform transferring of data to hard disk, It performs text or images or graphics to be seen on display devices,

There are various other system software which is developed for specific tasks, such as device drivers are installed in PC for better functionality of that device,

for example:: Device drivers of display cards and sound cards are used in viewing better resolutions on the computer screen and hearing sound from soundcards.

Programming tools, utility software, compiler, the interpreter is also considered to be system software. System software can be operating system and language processors

where the operating system acts as the interface between user and computers and language processors are those which convert programming languages i.e.

Assembly language and High-level languages to machine language which is a language that is understood by computers.

9 Differences Between Computer Hardware and Software

These are those programs that translate codes that are written in high-level or Assembly language into Machine language or that language that is easily understood by the computer.

These programs are used to help better functionality of hardware devices. Such as mouse, sound cards, and keyboards.

These utility programs help the user to better communicate and interact with software and hardware.

This acts as the primary interface between a user and computer hardware.

It presents the user with a GUI stands for Graphical User Interface where the user can directly communicate or interact with hardware and software used in computer systems.

The system software manages and controls hardware and user inputs.

They are also used in providing an interface for the development of application SW.

Application Software is a program that is designed and developed for specific purposes and for a special task that is directly used by the users.

In other words, it can be described as an interface between user and system software, which helps the user to perform a given specific task.

Common Application software is a word processor and spreadsheets.

Some of the applications SW are bind in together with other application software such as MS-OFFICE SUITE comes with MS Word, Excel, PowerPoint & Access and Adobe include Adobe Photoshop and Image ready together.

Pre-Installed Application Software which is installed automatically or in other words we can say that they come as a package includes in Popular Operating system such as MICROSOFT Windows.

They are designed and developed as well as customized as per the requirements of the clients. Software Developer which uses a high-level language such as Visual Basic (VB) for Front End and SQL(Structural Query Language) server for the development of the application software which fulfills the needs of their clients.

They are developed to perform a special and specific task as the user needs. The developer or the programmer has the privileges to change or update or add or delete the source code of the software any time when found necessary.

What are the 5 Examples of Hardware?

What are the Software Examples

What are the Examples of System Software?

The computer hardware devices are physical in nature whereas software are digital.

What is the Name of First Software

Who is Software king in World?

Who Wrote the First Software?

What is the heart of computer?

117 thoughts on “What is Computer Hardware and Software with Examples”