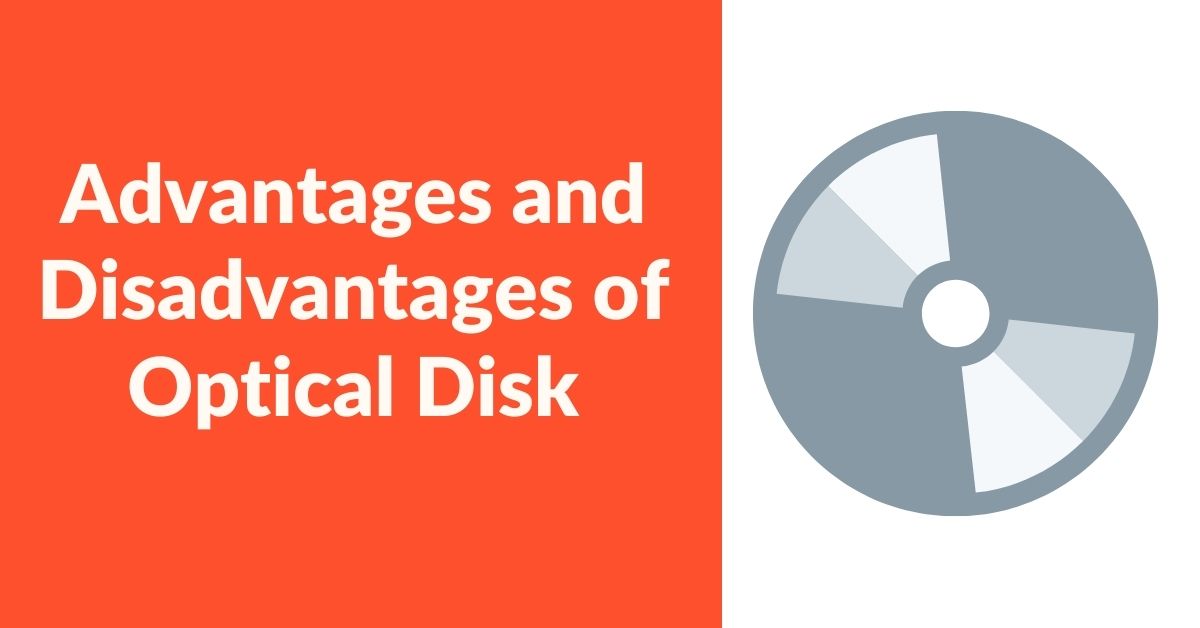 In this article, we are going to learn some basic to advanced 5 advantages and disadvantages of optical disks.

In the below article we are going to learn about the understanding of optical disk/drives their uses and history also we will clear all the doubts related to the pros and cons of using an optical disk.

So let’s get started

What is Optical Disk?

These optical disks are of circular shape and made of poly-carbonate plastic material and are 1.2 mm in size.

The data is read and write on the optical disk in the form of binary i.e. in (o’s and 1’s).

The non-circular shape of the disk does not exist therefore they are manufactured strictly in a circular shape.

These disks are very easy to handle and can be transported from one location to another with ease they are cheap and the data written over them can be stored permanently until and less any physical damage happens.

What are the Types of Optical Disk?

There are five types of optical disks which are mentioned below with a brief description.

CD stands for compact disk. These are circular shape disks that can store data and information permanently.

CD can store around 650 MB of data which can be easily transferred from one location to another.

To use this disk CD-ROM (Compact Disk Read Only Memory) was used as they were capable of reading the data on the disk which can be copied on the computer hard disk for further application.

They are very cheap and very efficient to use. Compact Disk (CD) was used to store data/information like images, videos, games, etc.

Due to enormous development in the computer industry, the need of storing huge data came into existence which these CDs were unable or incapable of.

Therefore they were replaced by other technologies (DISK) which we are going to discuss further.

DVD can store around 7 to 10 times more data than simple CD (Compact Disk) as they are capable of storing huge data and information they have become more and more popular compared to Compact Disk.

This optical disk is cheaper and can handle huge data efficiently. They can store data permanently

Double Layer disks are used because they can store huge volumes of data.

WORM stand for write once read many. They come in the size of almost 20 GB

These disks are normal disks that are the same in size and shape but their biggest advantage is that the data| information present in them can be deleted, edited, and updated easily.

These disks which can be modified are also called multisession disks.

These disks come in a capacity of 4GB to 18GB.

The first Blu-ray player was launched in the year 2006. In year 2003 first movie was build using Blu-ray technology the name of the movie was Charlie jungle.

The rewritable Blu-ray disk was launched by SONY company on 8th July 2006.

Blu-ray is used in storing data and information and is also called a secondary storage device.

Optical Disk was used in the year 1884 by Alexander graham bell and  Charles, they used a light beam on the glass disk to record sound.

1980 was the year when two famous companies name SONY and PHILLIPS develop the first generations of compact disks.

Standard Blu-ray disk stores around 20 GB of data whereas DVD stored 7.4 and CD can store up to  650 MB.

The costs of the optical disks are comparatively lower than the other storage devices. The manufacturing cost of these disks is lower because of the cheaper raw material available.

The need of storing huge data and information has led to the use of this kind of optical disk to a huge extent and hence the demand increased so production.

Blue Ray 6X BD-R Recordable 10 Pack comes at the cost of 1,350.00 Indian rupees. The technology advancement will lead to reducing the cost further.

The use of this optical disk is the biggest advantage as they are very simple to use and operate. To use this disk it’s essential to have a DVD-RW (Digital Versatile Disk Read Write).

This DVD-RW enables us to read and write the data which is present on the disk which is as simple as you can imagine.

Due to its ease to use it has been the most popular storage medium for ages.

The data and information are almost permanently stored on this disk. The data can be retrieved or copied from a disk to another location with ease.

We can also make another copy of this disk using another blank disk with the help of a computer and software like NERO.

The data available in the disk can only be corrupted or get damaged when there is physical damage on the disk other than that the data is safe for reuse.

The optical disk is not huge in size, therefore, needs less space for accommodation they are circular in shape.

The program area that contains the data commonly starts 25 mm away from the center point.

Due to their size, they can be easily transported and individuals can carry them from one location to another.

They are not like RAM (Random Access Memory) or CACHE MEMORY of computers which depends on the power supply.

This memory can hold or can store data even there is no power supply which in other terms is called “Volatile Memory”.

They are “NON VOLATILE” in nature.

This optical disk can be read-only when your computer or laptop has a DVD-RW installed on it whereas the Blu-ray disk cannot be viewed with the DVDRW.

So this disk has major restrictions and according to me, it’s one of the important disadvantages of the optical disk.

Now as the technology advanced the use of optical disks are used in fewer numbers.

Let us talk about the capacity of CD which comes in 650 MB and DVD comes in around 4.7 to 12 GB which is considered to be very less in this modern era.

As the modern software, games come in huge sizes, therefore, the Capacity of CD’s and DVD’s is not capable of storing this enormous data, therefore, we have to use another storage medium like external and internal hard disk drives which are comparatively cheaper.

the optical disks are very fragile in nature as well as very delicate and very thin and can get easy damage also get corrupt because of their low-quality standard.

The huge and cheaper production of these optical disks made them low in quality and therefore they are damaged and corrupted very easily and hence there can be loss of important data.

Due to their size, they can be misplaced easily and the important data inside them can be reproduced and replicated according to will.

And if this sort of personal and sensitive data reaches the wrong hands they can easily misuse and violate data which will be very harmful to personal and professional life.

What are the Advantages and Disadvantages of Optical Drives?

The list of advantages of optical drives are as follows

The list of Disadvantages of optical drives are as follows

What is Optical Disk With Example?

There are five types of optical disks which are mentioned below with a brief description.

In this article, we have discussed on advantages and disadvantages of optical disks also with the benefits and drawbacks.

If you liked the article please share it on social networks with your friends, family and colleagues also do comment with any suggestions and your opinion.